getting off the armchair

From Armchair Activist to Activist: Taking a stand for Palestine

I want to talk about the ongoing school protests at checkpoint 56. I touched upon this in my last post, but the situation is developing all the time. Beth and I have been following events closely; we attend the protests and have also been interviewing people and collecting together photo and video evidence. Yesterday Beth collated all this into a brilliant report. It’s up on the International Solidarity Movement website, which again I urge you all to take a look at. Heck, you could even donate.

Here’s what she wrote:

Today for the third morning running children and teachers from Qordoba Scool gathered on the H1 side of Checkpoint 56 at 7.30am. The children, with the support of their teachers and the Director of Education in Hebron, Nisreen Amro, peacefully protested against heightened ‘security’ measures that were introduced by the Israeli Army on Tuesday 11th October 2011. The protest was covered by local, National and International press.

School children as young as 6 years old had their lessons outside, sitting on the floor by the checkpoint, standing at intervals to passionately chant; “We will not return, we want our right to education”

For the past seven years teachers have had an agreement with the Israeli army that they can pass through the checkpoint gate instead of the metal detectors. However two days ago without giving prior notification the Israeli army changed the rules – they are currently insisting that everyone, including teachers, pregnant women and people with heart complaints/ pace makers must pass through the metal detector.

As previously reported by ISM the children’s impromptu protest on Tuesday 11th October resulted in a number of children requiring hospital treatment after being hit (with the butts of rifles) and kicked by both the Israeli army and the Israeli Police. Initially ISM reported that 7 children were taken to hospital, however today the father of one of the injured children informed ISM that 9 children were taken to hospital with injuries (1 boy and 8 girls). Fortunately all 9 children were able to leave hospital after a few hours. 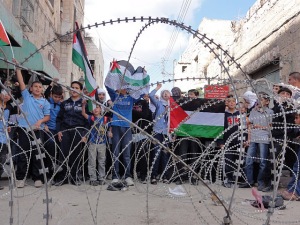 Today ISM volunteers interviewed 11 year old Yazan Sharbati, one of the boys violently dragged into the checkpoint by an Israeli Police Officer on Tuesday 11th October. Yazan stated; “There were no teachers in the school and so we protested to the army that we wanted our teachers. The army told us to go back to school, we told them that without teachers there is no school.”

Yazan was asked how he felt when the Policeman grabbed him and pushed him into the checkpoint, he replied: “I was so afraid that something bad was going to happen. He pushed me very hard.”

When asked if he intends to continue protesting against the closure of the gate at checkpoint 56 Yazan replied, without hesitation, “Of course”.

The Director of Education for Hebron, Nisreen Amro, told ISM volunteers; “If the Israeli Army do not reverse their decision by Sunday chalkboards will be brought to the checkpoint and lessons will be held here”.

At the end of the protest as ISM volunteers left the checkpoint they observed soldiers refusing to allow a heavily pregnant Palestinian lady through the checkpoint gate; she and her toddler were forced to climb the steep hill next to the checkpoint in order to avoid the metal detector. ISM volunteers will continue to observe and report on any future protests.

P.S. I think the Guardian might be covering this too. I’ll be really interested to know their take. Though it’s the Guardian, so I’m guessing it won’t be too different from our own – and with as many spelling mistakes. Moor annon.